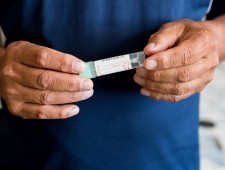 It’s just four months since the National Bowel Screening Programme was launched in the Southern district, but it’s already making a real difference to the lives of many residents and their families.

Since late April more than 5,000 home test kits have been sent to all parts of the South. From these, over 2,200 returned tests have shown a negative result, which means ‘peace of mind’ for these residents, and their families. A total of 141 tests have come back as positive for the presence of blood, which can indicate potential bowel cancer. (1)

Everyone who has had a positive test result is contacted by their GP to arrange further investigation through a colonoscopy.  So far 35 Southern residents have had a colonoscopy through the screening programme. From these, Southern DHB staff have already found cases of pre-cancerous polyps, which were subsequently removed, and one case of bowel cancer, for which the patient is undergoing treatment.

“It’s early days but preliminary results for the first few months of the programme seem to be tracking really well in terms of our participation target,” said Dr Jason Hill, clinical lead for the Programme.

Dr Hill says the increasing demand for colonoscopies, as a result of the bowel screening programme, has not increased waiting times for those who are outside of the Programme. “Thanks to the opening of our new Gastroenterology department, and the team’s hard work, we are able to see more patients needing colonoscopy within the recommended timeframe, which is two weeks for urgent cases and six weeks for non-urgent cases.”

People needing a colonoscopy in the future will also benefit from the launch this month of two new patient videos. The videos on “what to expect when having a colonoscopy” feature both Dunedin and Southland Hospital sites and are designed to help inform and de-mystify the procedure. You can view the new videos on the Southern DHB you tube channel: https://www.youtube.com/user/SouthernDHB

Staff at Southern DHB are delighted to be able to see the Programme already making a difference, as Dr Hill explains: “We’ve only been going a relatively short time but already we’re seeing what a valuable programme this is.  Being able to identify and treat polyps and early stage bowel cancer is already changing people’s lives for the better, and the more people that take part, the more of a difference we can make.”