Southland mothers and whānau affected by pregnancy and infant loss are the focus of a Maternity Memory Garden planned for the grounds of Southland Hospital.

The garden was the idea of Southland Hospital core midwife, Sara Evans, who realised that many women and families in the Southland region who have experienced pregnancy and infant loss, have nowhere to go to think about their babies.

What started as a small idea, supported by a small planning group of colleagues from the Maternity Ward, has blossomed into a movement of supporters across Southland.  They aim to open the maternity memory garden in time for the global ‘Wave of Light – Baby Loss Awareness Week’  in October.

The group is hard at work fundraising, and Sara has been amazed at the generosity of Southlanders and Southland businesses who have been donating money and goods towards making the garden a reality.

The Maternity Memorial Garden givealittle page raised $1,830 in the first five weeks, with donations continuing to grow, and the Maternity Memory Garden Project Facebook page has over 300 members – and more are welcome.

One Southland business has anonymously donated a bench for the garden, and another has donated decorative panels to help beautify the area.

Diacks Nurseries staff and Southland Hospital Gardener Annika Sollitt have used their expertise to help plan the garden, which will be situated on the site of a former rose garden built by Rotary in the 1970s.  Current Rotary members have donated $250 to purchase rose bushes – and a Facebook poll was held so project members could vote on what varieties of roses should be bought for the new garden.

Maternity ward staff have been fundraising within the hospital, with a bake sale on 5 July that raised $1,529.00, plus raffles and more.

Members of the public are invited to show their support by attending the Maternity Memorial Garden Jingo Night at the Waikiwi Tavern on Monday 9 August at 6.30pm.  Sara says the generosity of local businesses in donating prizes for the Jingo night have ‘moved me to tears”.

All proceeds from the night will go towards the Memoria Garden, and any surplus will be used to purchase additional resources and equipment to support bereaved families on the Maternity Unit, and for the provision of memory boxes. 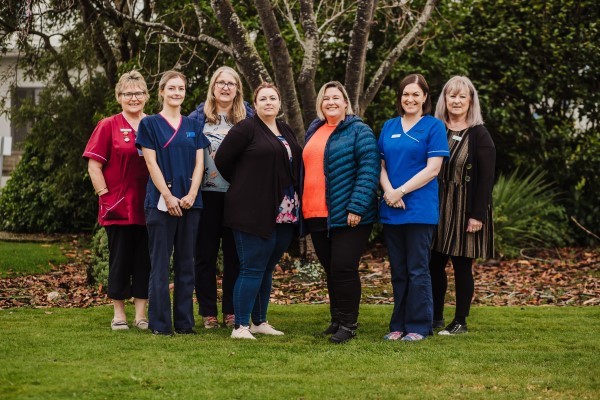 (Photo courtesy of Miller and Me Photography.)