A Queenstown man in his 40s and a Wanaka man in his 20s are among those announced in the past 48 hours as having been diagnosed with COVID-19 in the Southern district.

This brings the total confirmed cases in the district to eight.

The Wanaka man returned to New Zealand after travelling overseas, including to Europe. He has been in self-isolation since his arrival into Queenstown on 18 March. He has mild symptoms and is at home. Contact tracing has commenced.

The Queenstown man returned to New Zealand after travelling overseas, including to Europe and the U.S. He visited a supermarket briefly on his way home, where he has remained in self-isolation.

A Dunedin woman has mild symptoms and is a probable case. She is the wife of a man whose diagnosis was confirmed earlier in the week, and the mother of a Logan Park High School student. She has been in self-isolation since her husband was confirmed as having the virus.

Southern DHB is alerting people in a number of locations across New Zealand that they may have come into contact with people who tested positive for COVID-19 this week.

As part of its contact tracing process, it is important for public health teams to notify the public about the movements of infectious cases to maintain awareness of possible transmission and ensure everyone monitors their own health.

A number of confirmed cases of COVID-19 attended the World Hereford Conference (9-13 March in Queenstown) but none of these cases are residents of, or currently located in the Southern region. Conference attendees have been notified and asked to self-isolate for 14 days from last exposure.

In addition to conference attendees, there were a number of people who helped organise the conference who cannot be contacted, as the conference organiser has gone into insolvency. Those who worked at the conference are considered to be casual contacts and have not been asked to self-isolate but should monitor their health and immediately self-isolate and call Healthline on 0800 358 5453 if they develop symptoms such as a cough, fever, sore throat or difficulty breathing.

The following locations relate to possible casual contacts by members of the public that can’t be identified through contact tracing. Casual contacts are people who may have come into contact with the individual, but for less than 15 minutes and/or at a distance of more than two metres.

The risk in these instances is considered to be low. Those who believe they may have come into contact with the case are advised to monitor their health and call Healthline on 0800 358 5453 if they develop symptoms such as a cough, fever, sore throat or difficulty breathing. 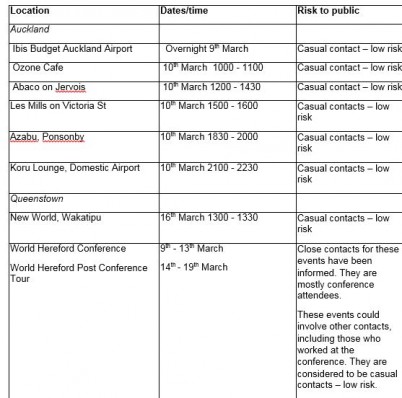