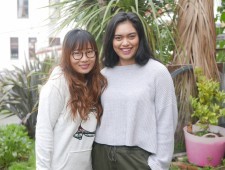 It’s Cervical Screening Awareness Month and all Southern women who are due, overdue, or who have never had a smear test are urged to get tested.

During Cervical Screening Awareness Month, the DHB is encouraging women to bring a friend along, book a back-to-back ‘buddy’ appointment and support each other.

Good friends Mereana Goodman and Evonne Wang did just that, having the conversation and supporting each other when they went for their smear tests.

Mereana had recently registered with a new medical practice and says, “The practice were quick to remind me that my smear test was overdue. I also knew that my friend Evonne needed to have a smear test too so we decided to go together.

Mereana and Evonne recommend going with a friend and say it was so much easier as they were able to discuss the test and support each other.

“Encourage your friends and whānau to go for a smear test. We supported each other, and a fifteen minute test has given us three years of peace.”

“We want as many people as we can to play a part in raising awareness and encouraging their friends and family to go for a smear test,” says Southern DHB Cervical Screening Programme Leader, Linda Moir.

“For instance, we can all talk to friends and whānau and discuss how to make it easier for women we are close to them to take up smear test invitations.”

“We’re hoping by starting conversations about the importance of having smear tests, more women will come along with their friends and whānau,” says Mrs Moir.

General practices across the district are also taking part in prize draw where women who have a smear test during the month can enter and have the chance to win a $50 voucher.

Women are also being encouraged to have the test by an Invercargill family, and Southern Steel players, in a poster campaign across the district.

“We’re hoping the messages on these posters will remind women the importance of looking after themselves by having regular smear tests,’ says Mrs Moir.

Every year 160 women are diagnosed with cervical cancer in New Zealand, with 50 women who die from it.

Having regular cervical smear tests reduces the risk of developing cervical cancer by 90 percent.  Three yearly screening is recommended for women from the age of 20 to 69 if they have ever been sexually active.

“The screening takes around 15 minutes, and is an uncomplicated procedure with a proven ability to save lives,” says Mrs Moir.

To find out more about cervical screening visit https://www.timetoscreen.nz/cervical-screening/