If you are aged 15 to 30 years and haven’t had at least one MMR (measles, mumps and rubella) vaccine, or you are not sure, get your FREE immunisation now.

If you are aged 15 to 30 years and haven’t had at least one MMR (measles, mumps and rubella) vaccine, or you are not sure, get your FREE immunisation now.

Measles is a serious disease that is about eight times more contagious than COVID-19. Getting immunised is the best way to protect you, your whānau and community from catching and spreading measles.

In Southern towns and cities there were 72 cases of measles in 2019 – part of more than 2,000 cases New Zealand-wide, and sadly in Samoa 80 people, mostly children, died from the disease.

Southern DHB’s Medical Officer of Health, Dr Susan Jack is calling on young people who haven’t been immunised for measles to make it a priority to get the FREE MMR vaccine.

“Many people born between 1990 and 2005 are not fully protected because a higher than usual number of them did not have their scheduled childhood MMR vaccinations.

Young people can get their FREE catch-up vaccinations now from General Practices and participating pharmacies across the Southern District.

A map showing the location of participating pharmacies in the Southern District is below. 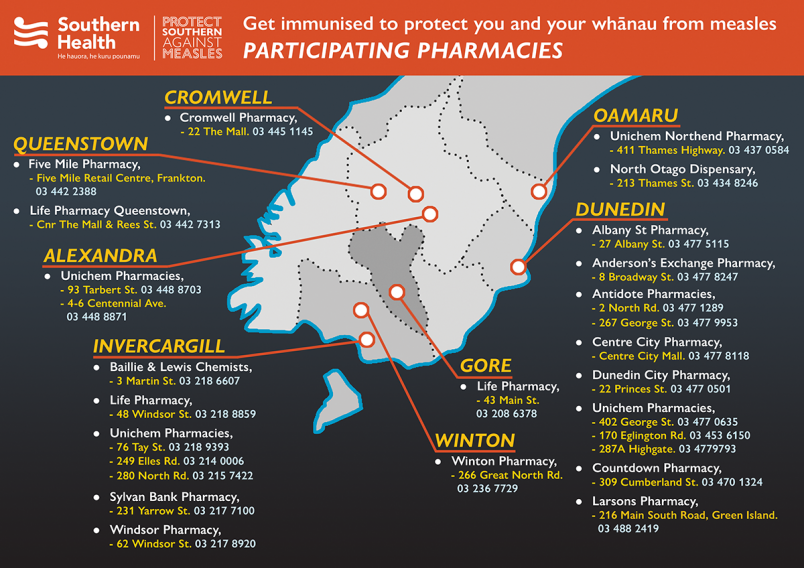 For other age groups, MMR is also part of the childhood immunisation schedule which from 1 October 2020 has changed to fully protect children at a younger age with doses at 12 and 15 months (formerly 15 months and 4 years). In addition, anyone born after January 1969 continues to be eligible for two free MMR doses.